The Mañana Prize will be launched tomorrow for outstanding commitment to putting off important actions that can be left until another day. It will be judged on the length of the delay and the seriousness of the consequences. It is a celebration of the human capacity for stoical denial in the face of adversity.

In borrowing the Spanish word mañana, I intend no disrespect for the good people of Spain; it is just such a good word for tomorrow. Playing the game of mañana to the full can justify putting off action almost indefinitely. Each day the problem festers, getting slightly worse, until someone eventually does something or the problem goes away. Putting off what does not have to be done today is a good tactic to avoid bother but it is not effective as a long-term strategy. When world leaders rely on mañana to get from one day to the next, from one meeting to the next, from one summit to the next, from one policy to the next; we should be very worried. 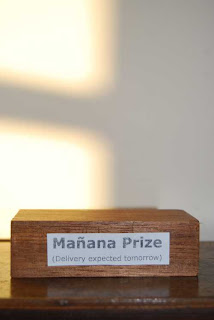 In looking for potential winners, special mention goes to the euro zone leaders who have been playing mañana for the last two years, since the fault lines in the euro were exposed. Decisive action should have been taken over a year ago – even allowing for the slow process of European diplomacy. Each day that mañana has prevailed the crisis has got deeper; the euro is now in a deep hole but still Europe’s leaders procrastinate. They are now waiting for sovereign debt default to force change which will be unpredictable and dangerous to the world economy.

Another strong runner for the Mañana Prize must be the UN brokered climate talks where the game of mañana has been playing for nearly two decades. At the close of the climate conference in Durban the organizers announced success. You would have thought this would be to cut greenhouse gas emissions, but no; the success that was trumpeted was an agreement to start talking about an agreement that could be signed in 2015 to start cutting greenhouse gas emissions from 2020. Two decades of delay, in the context of claims that climate change could be the worst crisis in human history, makes the UNFCCC a very strong contender for the Mañana Prize.

Meanwhile, amongst the stories that do not make the front page, the UK government has agreed that the state should be responsible for nuclear waste after a nuclear reactor has come to the end of its life and stopped generating power. This policy is needed to persuade private enterprise to build the UK’s next generation of nuclear reactors. The business case relies on passing the legacy of the waste to future generations sixty, a hundred or two hundred years into the future. Taking into account the length of the delay and the severity of the consequences, the UK government is currently the frontrunner for the first award of the Mañana Prize.
Posted by Peter McManners at 11:06 No comments:

The main elements of the deal struck in Durban is that all the world’s countries will start discussions next year aimed at signing an agreement by 2015 that will come into force in 2020. The main benefit of the deal – as seen by some observers – is it has re-established the principle that climate change should be tackled through international law, not national, voluntarism. After two decades of talking, there is another conclusion that can be drawn; the world is not willing to make the compromises required for a legally enforceable and effective global carbon reduction plan. 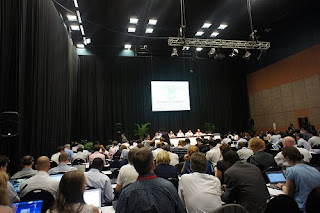 The odds were always stacked against the main delegates in Durban who arrived with the brief to secure the best deal for their country. There is little appetite for compromising national self-interest in favour of the global good. This is not something that can be changed easily; it is deeply engrained in world politics that national self-interest dominates negotiations. This is the starting point from which the horse-trading commences and is why Durban was always likely to fail.

The bureaucratic machine of the UNFCCC will lumber on towards 2015 documenting in ever greater detail the collective failure of the world to act. World leaders can use this as an excuse not to take action at the national level until a global agreement is concluded. Spinning the output of Durban as a success is disastrous by leaving the impression that action is in hand; when clearly it is not.

The truth should be faced: the world has agreed not to agree to any action until 2020. Accepting this reality would be useful in passing the buck back to governments to decide on the next course of action.

Climate change is a clear and present danger which for some low-lying countries, such as The Maldives, is a death warrant. For other countries, the direct impacts may be less but no country will escape the disruption and potential conflict as change ripples through the ecosystem and world society. It is clear that climate change is a danger that we should be working hard to avoid; every government can see the danger and has growing support from their electorate to do something about it. If it cannot be done globally, action has to be national with each nation deciding what it can do that fits its circumstances and capabilities.

Action is needed despite Durban; national carbon reduction measures are required on a piecemeal basis with the advanced economies with sophisticated electorates in the vanguard leading the way. Of course this will put the economies of the leaders at a disadvantage, but rather than see this as a barrier, this must be recognised as the opportunity to force change in other areas where there are barriers such as trade agreements. Leading climate action at the national level will be difficult, but necessary, and require facing down opposition from countries that oppose. This is how to start to build a cohort of countries willing to take whatever action is necessary.

Don’t use Durban as fig leaf for inaction; use it as a call to leave the UNFCCC on the sidelines as the leaders get moving.
Posted by Peter McManners at 03:13 No comments:

Without a global agreement on carbon dioxide emissions, countries should take unilateral action.

To cut carbon dioxide emissions requires every country to make the transition to a low-carbon economy. The developed world will have to embark on a huge program to replace infrastructure that depends on fossil fuel. The poorer countries do not have such a legacy to contend with but should build their economies using low-carbon infrastructure – not copy the mistakes of the developed world. For rich and poor this will cost more until low-carbon becomes standard across society and the economy. This is the challenge we face.

The global action required is the sum total of each country’s efforts but individual countries that take a lead will put themselves at a commercial disadvantage in the global market place. Our response to this is to wait for a global agreement so that all countries move together. This can be seen in the UK, where the previous government took a lead by enshrining bold carbon reduction targets into law. The current government is starting to indicate that, unless other countries adopt similar targets, the UK will back off.

The Climate Change talks in Durban seem to be going nowhere but we should look for the positive in this. The Copenhagen talks of 2010 showed the direction of travel, and the Durban talks seem to be confirming, that a global agreement is not forthcoming. After two decades of talking the UN brokered climate talks is not delivering a solution. This should provide the foundation stone on which to build the policy going forward. This outcome is not what was envisaged when the UNFCCC was set up but this is the reality.

Without a robust global solution, countries will have to push ahead. The UK for example should be bold and stick to its targets. The consequence, within an open global market, will be that these countries will suffer a huge commercial disadvantage. These leading countries will have to adopt protectionist measures and be willing to face down opposition from the countries that are reluctant to act on climate change – which may include breaking WTO rules. This is the price of failure to close a global climate deal, but the cost will be less than continued inaction and stalemate leading to growing carbon emissions.

Ardent supporters of free markets will complain of course but the climate crisis requires a crisis response and when the policy framework of economic globalisation starts to crack it is necessary to adopt a different macro-economic model.
Posted by Peter McManners at 01:18 No comments: