This is the time of year that The Sunday Times publishes its list of companies ranked on how green they are, but not this year. The cover of yesterday’s paper had nothing even remotely green in the stories that made the front page. 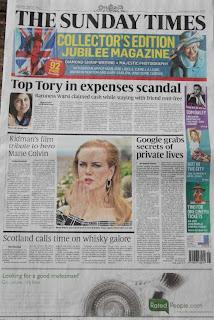 The Sunday Times Green List was first published in 2008 ‘to reflect the changing mood in the business world’ (as the paper explained when launching the initiative). This year the list has been withdrawn. Is this also a reflection of the changing mood in the business world? Are companies under too much financial pressure to bother to be green and have shelved their aspirations?Or is there something more significant going on?

The reason given by the paper’s owner, News International is that the list has been withdrawn because the supplement did not attract sufficient advertising revenue. Publishing the Green List was simply not commercially viable so has been cut.

A deduction that could be made is that companies have decided that green doesn’t pay so they are no longer doing green. Financial and commercial pressures mean that there is no fat in the budget for going green. If this is true, the logic would be that we must wait until the economy picks up before observing the next phase of greening industry and commerce.

There is a different interpretation of the withdrawal of this high profile media list. Companies have realised that green PR spin aimed at enhancing the reputation of the corporation doesn’t work. Paying the fees to enter the selection, and paying for advertising when it’s published, is not a good return on investment. The companies that really understand green are getting on with building the company, not shouting about their aspirations. In these challenging financial times, effort should go into core business activities. Saving money through more efficient operations (greener) gets funded; paying to be on a list in The Sunday Times does not.

Which of these is right? Is green now dead and no longer seen as a business imperative? Or, are green companies coming of age and building real businesses based on performance rather than green spin?

Looking for the answer, I noted that at last week’s Sustainable Business conference in Birmingham, UK there was an upbeat attitude and reports that the green technology sector had been bucking the trend with strong growth. I believe that the withdrawal of financial support from companies to fund The Sunday Times Green List is a sign of sound commercial objectives replacing fluffy greenery. If there are regrets these will come from News International for backing off from a good initiative without seeing it as an investment in the future.
Posted by Peter McManners at 02:40 No comments:

In-Bed with the Enemy

As an author I keep an eye on what is happening in publishing and notice that the UK high-street book chain Waterstones will start to sell Amazon’s Kindle in its stores. The e-book is threatening to kill off the high street book shop so why bring the enemy inside the city walls? I wonder why Waterstones is sleeping with the enemy. 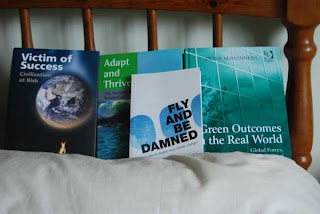 How do we get sustainability noticed and get more people engaged with sustainability? I dipped my pen into the horror genre with my book Victim of Success: Civilisation at Risk but only the first part of the book was a horror story. For most of the book I let my natural optimism shine through in explaining how we can change direction and prevent the horror story from becoming reality. Perhaps my problem was not to embrace the genre enough; I should have provided full-on horror. Perhaps people prefer snuff movies and want to wait for the news stories when the damage is real and the situation is grave.

So why is Waterstones embracing the e-reader in its stores? The reason is that Watestones is listening to its customers. People are increasingly buying e-books and it is not a trend you can buck. Waterstones have to work how to secure their future in a changing world. Book shops may no longer sell books but become meeting places to gather with other readers, to meet authors, and to help decide which e-book to download. As a proponents of sustainability we should also be listening to our ‘customers’.

The lesson for those of us wanting to sell sustainability to an indifferent and sceptical public is to give them what they want. They want to hear how to improve society, how to secure their future and how to have a better quality of life. This is the message that must come out of sustainability: get into bed and seduce our opponents.
Posted by Peter McManners at 01:52 1 comment:

‘We are like a rabbit caught in the glare of the headlights of a speeding truck. We can easily escape, but we are transfixed by the situation. Instead of leaping off to the side, we wait to see if the wheels run over us.’ 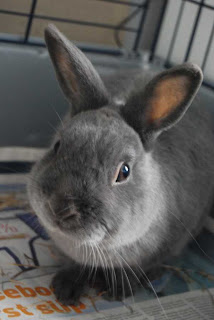 I wrote these words as I grappled with the challenges of coming up with policy for a sustainable world. It was a long slow mental journey because business-as-usual is so deeply engrained, not just in policy and regulation, but in the thought processes we employ. The education system teaches a narrow viewpoint of the world and encourages a selfish and short-term logic in managing our affairs.

The analogy of the rabbit, sitting in the middle of the road caught in the glare of the headlights of a speeding truck, is an accurate reflection of this point in human civilization. One option is to sit it out as the juggernaut of climate change and resource depletion charges over us, hoping that the effects will hit another family, another community or another country. There may be a thin corridor between the wheels if we keep our head down low where we can survive as destruction takes place around us, but it is a huge risk and morally indefensible. Not only a risk, but the consequences of failing to act, will affect everyone as climate refugees look for a new home and the prices of resources climb to unaffordable levels. We will all be poorer as a result.

The rabbit feels happier to sit still hoping the danger will pass. People also do not like to be scared by having reality brought home to them. This I call the ‘Stunned Rabbit Syndrome’. I wish I knew how to cure it. People want to read upbeat optimistic assessments that allow them to be happy and content with their situation. Explaining to people how it really is, switches people off; they become deaf to logic.  Take the other approach, explaining that we have the solutions, people listen but only up to the point where you explain that the solution are not automatic. Effort is required; compromise will be necessary and reining back on material consumption a necessary prerequisite for success. People with stunned rabbit syndrome hear the word ‘solution’ and then switch off feeling happy and trusting that someone else will make it happen.

Are we all rabbits? Or, do enough of us have the courage to face reality and force through solutions?
Find out if you suffer from stunned rabbit syndrome:

Victim of Success: Civilization at Risk is now out as an e-book on Kindle.
Posted by Peter McManners at 03:45 No comments:

Bail out? yes, but jumping out, not injecting more cash. 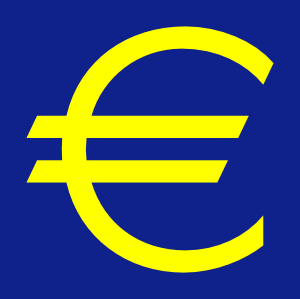 There is much talk, again, about raising further loans to shore up the euro. The time has come for this delusion to cease.

In a sustainable single currency there must be a mechanism to transfer funds from the strong to the weak regions. A batch of further loans to deeply indebted southern European countries – which it would be impossible to repay – is not a solution.

A default on loans could help the euro to limp on with its full complement of the existing membership for months, or even years if the default was large enough. Default on loans made through the European Stability Mechanism could have the same effect as a transfer of funds from the weak to the strong Europe economies. The UK should be careful not to be exposed and drawn into such an arrangement. A loan with a good prospect of repayment at some point in the future is low risk (and may even make a profit for the UK if it is made at an interest rate above the UK’s cost of borrowing) but a loan made on the unspoken understanding that it is the first stage of a controlled default would be highly damaging. The UK is outside the euro and not therefore subject to the same commitment to transfer funds to weak euro members. This is the job of the strong members inside the euro zone, such as Germany whose exporters have done exceedingly well from a lower exchange rate than would have been the case if Germany had retained the Deutschmark.

In a single currency, weak regions will need support and strong regions will have to foot the bill. These are the simple economic facts played out within every national economy and a requirement of every successful currency union. The sticking point is whether Germany will pay the price. If not, it would make logical sense for the highly indebted countries to bail out of the euro and go back to national currencies. This is not the ‘bail out’ that the politicians are discussing now but it has a much more realistic chance of success than adding further loans to a flawed system.

The frustrating aspect of all this is that it has been obvious for many years that the euro has fault lines. The solution for greater macroeconomic stability in European economic affairs is through collaboration between separate economies building on the relative strengths of each, not through a union in which one-size-fits all. Europe is a wonderful mix of countries, cultures – and economies. We should accept reality, celebrate diversity and encourage the southern European countries to get on with bailing out of a foolhardy project. The consequences will be unpredictable, and could be terrible in the short term, but not so dire as failing to act yet again.
Posted by Peter McManners at 02:22 No comments: