Nissan have a website making an outrageous claim http://www.nissan-zeroemission.com/EN/index.html

On it they claim that the Nissan Leaf has reduced CO2 emissions world-wide by 31,764 tons.

I clicked on the button with the name ‘what exactly do these numbers mean?’ This is the explanation:

‘If powered by gasoline Nissan Leaf would produce 31,764 tons of CO2’

I own and drive a Nissan Leaf to get a feel for electric cars as I believe they will be part of the future. I can also plug it in on a bright sunny day and fill it up from the solar panels on my roof but usually it gets charged at night on the cheap electricity tariff. This electricity comes off the grid which includes a whole range of power stations including my local power station at Didcot which burns coal. Taking the overall carbon intensity of the UK power grid, I have done the calculation (I admit on the back of a scrap of paper) and the overall carbon emitted to charge the Nissan Leaf is comparable with the carbon emitted by an efficient small diesel car – like the one I used to drive.

The Nissan Leaf is a compact 4-seat family car for short local journeys and it works fine. I also had quite liked the idea that driving the Leaf was a statement that I was interested in the transition to a low-carbon future. For example, the solar panel on the roof to charge the small battery for the car electrics is a nice touch. However I am disgusted that Nissan is making such outrageous and unjustifiable claims. Overall, the Nissan Leaf has not saved the world from significant CO2 emissions. Nissan can claim to be a pioneer in the technology of a low-carbon future but allowing their marketing people to make claims like these will backfire and loose support. Those of us who campaign for a greener future do not want to be aligned with such corporations.

I would be happy for Nissan to show me their calculations and defend their claim but as far as I can see this is a case of ‘greenwash’ and they should be ashamed.
Posted by Peter McManners at 08:45 No comments:

Where is the Economy going?


"This sucker's going down."

George Bush's pithy description of the US economy during the 2008 financial crisis has been lampooned by comedians the world over but the joke may be about to end. Not renowned as being a deep thinker, George Bush was more prescient than he could have realised; it was only the timing he got wrong.

The fundamental economic facts in 2012 have changed little since 2008. The debt overhang and imbalances in the global economy remain huge; such that a major correction is required, somehow, some way. There is a belief that a smooth correction will be possible but for many countries the debt is beyond their ability to pay. The Eurozone in particular has huge internal imbalances which require either the pooling of debt (which the Germans and Finns won’t allow) or break up. There is not a third way ‒ despite the smoke and mirrors that European policy makers are using to uphold the belief that the euro will survive intact.

World leaders and central bankers have worked hard to hold the world economy up over the last four years through pumping in new money and buying up distressed assets. This is like a doctor loading up their patient with increasing doses of anti-depressants despite knowing that withdrawal will be much harder beyond the immediate crisis. Policy is focussed on bolstering confidence and encouraging the belief that all is well.

The point will come when confidence evaporates and a rush into real assets begins. The clever money has already moved, when the rush begins there will be few exits available and the world’s markets will move in unison.

I could be wrong; I hope I am wrong; but reality has to return eventually.  The world economy is more connected, more interdependent, more indebted and more imbalanced than at any previous time in history. Whichever way it goes, we will all go together. Perhaps we are like a cartoon character that has just run off a cliff and is hanging in mid-air, legs still running, defying gravity for as long as possible. The trouble is we don’t live in the fantasy world of international finance; we live in the real world where facts cannot be ignored indefinitely.
Posted by Peter McManners at 03:28 No comments:


It is certain that Greece has plans to leave the euro but these will be marked ‘Top Secret’ and only shared with those who need to know. If the market knew that Greece was leaving, and the date of its departure, there would be a run on Greek banks and huge opportunities for the speculators. I have looked into my crystal ball and the logic points to the weekend 27-29 October. 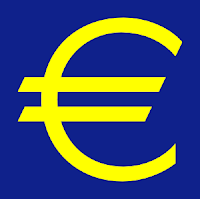 On the 28th October 1940, the Italian ambassador in Greece, Emanuele Grazzi, demanded that Greece allow Axis forces to enter Greek territory and occupy certain unspecified strategic locations or otherwise face war. The Greek reply is said to have been a simple ‘Ohi’ meaning ‘No’ although the precise wording in the diplomatic language of the time was ‘Alors, c'est la guerre’ (Then it is war).

The Italians expected a quick war lasting no more than a few days but the Greeks fought back and it was not until the next year that the German forces entered the fight and finally succeeded in invading. The Greek’s bravery was recorded by Winston Churchill who declared that "Hence we will not say that Greeks fight like heroes, but that heroes fight like Greeks".

The 28th October (Ohi Day) is now a public holiday in Greece and a day for the Greeks to be proud. This could also be the day of the Greek exit from the euro, not harping back to fighting against the Germans, although there are some interesting resonances with modern day Greece which the Greek popular press are likely to highlight. This day will be chosen because the Greek exit is long overdue and this next bank holiday weekend will allow time to make the changes whilst the Greek banking system is closed for business over the long weekend.

The report on Greek finances by the ‘troika' representing Greece's international lenders – the European Commission, European Central Bank and International Monetary Fund – was expected to be finished by the end of September, giving Eurozone finance ministers time to study it, and debate it at their meeting in Luxembourg today, but it has been delayed. It is my suspicion that reading between the lines of this report it will become clear that Greece will have to leave the euro. Rather than publish the report and allow the markets to reach this conclusion, it has been decided to leave the euro before the report comes out catching the markets by surprise and giving Greece a chance of pulling off this difficult and complex move.

At today’s meeting of finance ministers in Luxembourg there will be some around the table who know of the Top Secret plan but it will not be discussed and not shared with those outside the tight group of people who need to know.
Posted by Peter McManners at 02:17 No comments:

A Super Tanker without a Captain

The Arctic sea ice is an important indicator of change taking place in the climate systems of our planet. If this was on the control panel of a super tanker there would be a flashing red light and the Captain would be woken to come to the bridge. Evasive action would be needed to prevent the tanker foundering.  Of course if the crew get it wrong they can abandon ship; but we cannot abandon planet Earth. When the climate changes, we will have to fight for space to live in places above the rising sea level and regions where it is still possible to grow crops. 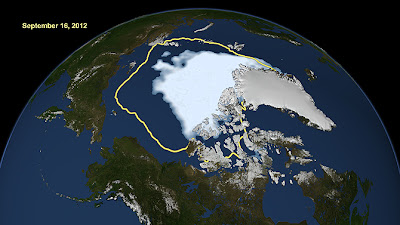 
The advanced technology of our satellites gathering images 24/7 and transmission over the internet allow us to monitor the Earth’s indicators in real time.  These pictures show that sea ice reached its smallest extent on 16 September; it is now starting to rebuild as the season changes and the Arctic moves towards winter. This annual expansion and contraction is part of the normal cycle but the minimum ice extent this year is the smallest ever recorded. Scientists at the National Snow and Ice Data Center (NSIDC) report that sea ice extent fell to 3.41 million square kilometers (1.32 million square miles), now the lowest summer minimum extent in the satellite record. “We are now in uncharted territory,” said NSIDC Director Mark Serreze. “While we’ve long known that as the planet warms up, changes would be seen first and be most pronounced in the Arctic, few of us were prepared for how rapidly the changes would actually occur.”

This is flashing a warning from the systems of planet Earth but the Earth’s system respond very slowly. Like a super tanker that turns ever so slowly after the rudder position is shifted, excess carbon dioxide emissions need controlling now or there will be no stopping the consequences. It may already be too late to prevent climate change but a good Captain would take evasive action to limit the damage. It would be incompetent to leave the ship to continue on the same course.

NSIDC scientist Julienne Stroeve said, “Recent climate models suggest that ice-free conditions may happen before 2050, though the observed rate of decline remains faster than many of the models are able to capture.” Serreze said, “While lots of people talk about opening of the Northwest Passage through the Canadian Arctic islands and the Northern Sea Route along the Russian coast, twenty years from now from now in August you might be able to take a ship right across the Arctic Ocean.”

There seems to be no intention to respond to this warning but to keep the fossil-fuel economy going at full tilt. It is as if the world leaders are on the Bridge of a super tanker, the warning light has come on, and rather than respond they have placed a coat over the control panel, leaving them free to discuss the opportunities of an ice-free Arctic Ocean. “What warning? I see no warning.”

It is a shame that planet Earth doesn’t have one Captain; we will not know who to prosecute for wilful incompetence.

Posted by Peter McManners at 01:27 No comments: