Climb out of the sewer of fossil-fuel dependency

I see this written and spoken again and again. Most recently, Tom Montgomerie writing in the Times earlier this week:

‘No half-decent politician in any part of the developing world was ever going to delay economic progress by embracing expensive energy sources’.

In the article titled ‘The greens can’t defy gravity. They’re finished’, he claimed that green enthusiasts’ policies were always an attempt to defy economic gravity. My understanding of gravity is that it is indeed a powerful force which usually wins out in the end. We may try to climb up to a better life on higher ground but gravity will always be attempting to pull us back down into the bottom of the pit. We have plenty of evidence that we can defy gravity with soaring cathedral towers and villages built on the top of hills. These are difficult to construct, take more effort and cost more but we do it because the outcome is so much better than digging holes in the ground in which to live and worship. 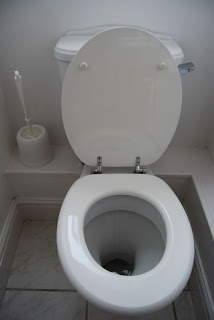 Regarding the narrow economic argument that fossil fuel is cheaper so we must use it, is politics of the sewer. Of course it would be cheaper to wallow in shit but instead we put considerable time, effort and money into living at a higher level where our excrement can be washed away out of sight and out of mind. Carbon dioxide emissions may not have the same smell and texture as excrement but we pump it into the air we all share and breathe. We had an excuse before we knew the indirect dangers to our collective health like people living in the early 19th century suffering from the scourge of cholera. It took the work of John Snow in the middle of that century to show that cholera is a waterborne disease. That insight led to investment and expense of public sewers underground. We don’t complain that it would be cheaper to have open drains in the streets so why do we hold back from building the low-carbon economy?

It is time to break the delusion. We need to close down the use of fossil fuel; therefore energy will cost more. Fossil fuel is so universal in our economy that the economy will be completely reconfigured. This is not something to be avoided but something to embrace. Let us getting on with building the soaring low-carbon cathedral and climb out of the sewer of fossil-fuel dependency.
Posted by Peter McManners at 03:10 No comments: 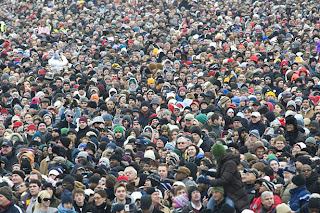 On WorldPopulation Day, should we celebrate the human population or despair that it continues to increase?

Discussing population is a necessary discussion but all too often the debate is neutered before useful insights can be drawn. Many well-intentioned people believe that interfering in people’s choices about having children is off limits to policy makers. This takes us down a route where ballooning population is discussed in terms of how to obtain the resources this growing population will need, such as squeezing yet more output from world agriculture. From a logical viewpoint, this is plainly ridiculous when we should be focussing on the cause by considering policy that holds the population in check.

We should celebrate each human life but we should not celebrate the prospect of a world population of 9 or 10 billion, or more. Of course no one wants to discuss the solution we would use for an animal population. If this was running out of control we would cull with the focus on making it humane and painless. For humans, this is off-limits. However it should be entirely reasonable to consider how to influence the choices parents make with the intention to hold population in check.

It is entirely reasonable to argue that each person should not expect to be able to have more than two children. It is sensible to use tax incentives to support smaller families (and penalise larger families). It is good policy to provide adequate care for the old to eliminate the idea that a large family is needed to ensure you have someone to care for you when you are old. It is manifestly a good idea to improve education and prospects for girls so that they know how to limit their fertility and have other options open to them other than child rearing. It is only my first point that is worthy of debate; the other points should be rolled out around the world as policy without delay.

We should save the celebration until we have brought stability to population, and started to see the numbers decline, to make it feasible to live well within the capacity of the planet.
Posted by Peter McManners at 15:45 1 comment: