The ‘Green Deal’ launches today providing loans to pay for energy efficiency measures for buildings recouped through a levy on electricity bills. The ‘Golden Rule’ is the test that the measures will save more on the energy bill than spent on efficiency. The theory is sound but in practice the plans are flawed and will not be taken up by householders in great numbers. There are two key problems to be fixed: First, the interest rate set for the loans is at commercial rates (6.96%). Second, the calculation is based current energy prices rather than factoring in future energy price rises. This makes the Green Deal ‘Golden Rule’ hard to meet. 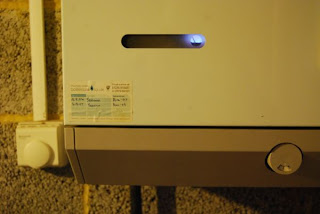 Most householders have savings on which they are getting little more than 2% return so it would be better to use these. Others will be able to increase their mortgage at a rate less than 7%. So there is no incentive for better off householders to use the scheme. This high cost of green deal finance will fall on the poorer people who don’t have the available cash or the ability to borrow at low rates. It is not just the cost of finance that makes the Golden Rule a high hurdle but working out the figures on current (low) energy bills makes it exceptionally hard to make the figures balance. This is unfortunate because energy efficiency measures are exactly what are needed. Can the Green Deal be made to work?

Fixing the Green Deal requires dealing with both the interest rate on the loan and the price of energy used in the calculation. There is a simple economic way to deal with this, but the politics are complex. The government should abandon its disingenuous claim that energy prices can be held down and tell us the truth that energy prices will rise steeply. Well- off people will then invest in efficiency measures without the need for government support. The government should not wait for fuel prices to rise but implement taxation on the fossil fuel used to heat our buildings. These receipts can be used to drive down the interest rates on Green Deal loans for the less well-off and invested in direct intervention to install efficiency measures such as better insulation in the homes of the poorest and most vulnerable people such as the old and infirm.

The Green Deal will be a damp squib of a policy unless it is fixed soon. Politicians should find the courage to be truthful and push through high energy prices whilst the additional price can be kept in the UK economy to invest in efficiency measures. The virtuous circle of taxing fossil fuel to invest would make the golden rule easy to meet, at a time when the economy could do with a boost, and transform the standard of UK buildings.


The grounding of the 787 Dreamliner is a blow to Boeing but not a surprise. A new model, using novel manufacturing techniques and new technologies such as electric systems to replace hydraulics, will always have teething problems. I am sure Boeing will get to the bottom of the cause and the 787 Dreamliner will return to the skies. This shows that to design and build an aircraft that departs from the current tested parameters is risky. It is going to get riskier still for the aviation industry as people demand that emissions from aviation are reduced. 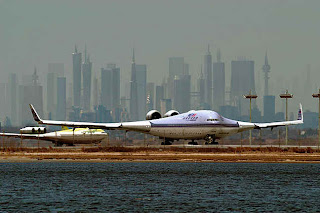 This picture, purporting to be the Boeing 797, shows a blended wing aircraft which many people think will be the future of fast efficient air travel. It is expected that such aircraft can be a massive 50% more fuel-efficient than the conventional tube with wings design. They can be stiffer, lighter and have better aerodynamics. An aircraft like the Boeing 797 would make the current airline fleets obsolete in a world of rising fuel costs. The engineering of such a design is understood so there are no technical barriers but with such a radical design there may be teething problems. There may also be passenger acceptance issues as people get used to not having a window seat but nothing that cannot be overcome.

This image is from an article in the magazine Popular Science a decade ago and widely circulated on the internet as a hoax, but like all good hoaxes has more than a grain of truth. Blended wing aircraft can and have been built and would make conventional aircraft obsolete, including the 787 Dreamliner. It would be commercial suicide for Boeing to trumpet this next stage in the evolution of aircraft until it has built and sold the 1,000 planes in its order book. Boeing will not be building blended wind aircraft any time soon ‒ unless we demand they should. If we decided to tax aviation fuel in line with ground transportation, we could bring forward this next generation of aircraft.

I hope that the technicians at Boeing find and solve the problems with the Dreamliner but I hope the senior corporate management authorise the design of a blended wing passenger aircraft, not as large as the Boeing 797 concept but of similar size to the Dreamliner. Commercially, they will not want to take this path but that is what the world needs.
Posted by Peter McManners at 02:10 No comments:


Australia is burning as record temperatures scorch the country. I wonder if this will be enough to put a bushfire through Australian coal policy.

Australia's highest recorded temperature is 50.7C, set in January 1960 in South Australia. The record for the hottest average day across the country was set last Monday, at 40.3C, exceeding a 40-year-old record. Wildfires are raging across New South Wales and Tasmania. For next Monday Australia's Bureau of Meteorology forecast temperatures over 52C – so high that it has had to add a new colour to the top of its scale, an incandescent purple. 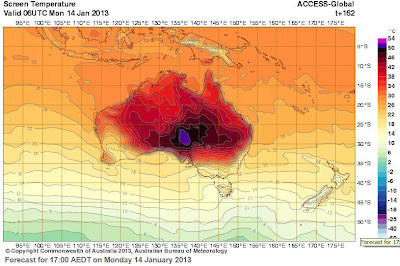 This is a country with huge reserves of coal which it burns to generate electricity and exports, particularly to China. The coal industry defends itself in forthright Aussi style with mining magnate Clive Palmer accusing the Australian Greens and Queensland environmental campaigners of "treason" in conspiring with US powers to destroy the nation's coal industry. This is also a country blessed with one of the largest solar energy capacity per head of population on the planet. Australia could close down its coal industry and get all the energy its needs from solar, not just solar power stations but houses with air conditioning running from solar panels on the roof and a whole range of innovative methods to gather the Aussi rays. This includes a huge commercial opportunity in the potential market for ‘liquid sunshine’ as I wrote in my book Adapt and Thrive: The Sustainable Revolution:

Australia has huge deserts, technical expertise and investment capital. It is a great country, but under the Howard premiership (1996-2007) it has risked undermining its standing in the world by not engaging with the world’s efforts to reduce carbon emissions. I believe this is very short-sighted. If the world turned against fossil fuels, then the economic barrier that prevents us from solving the challenge of fuel from the desert would be removed. I believe that it would be in Australia’s long-term interests to switch policy and push hard to eliminate fossil fuels. Australia should act first at home and close down its coal mining industry in order to have the credibility to then support world efforts to close down the market for fossil fuels. In this way, Australia could become much more sustainable and establish a lucrative market for ‘liquid sunshine’ from Australia’s vast desert interior.
The world would have enormous respect for Australia if it could put short-term economic considerations aside to pursue such a strategy.

The case for closing down the world coal industry is strong on environmental grounds. For many countries this would be hard; for Australia it is feasible and sensible to stop cooking on coal but short-termism and vested interest will intervene. Aussis don’t like being lectured by outsiders but I am an insider born in Hobart, Tasmania with every right to speak out. Wake up Australia, pull your thumb out of your bum and stop the Barbeque whilst you still can.

Time to turn Off the Christmas Lights


It is twelfth night, Christmas is over and it’s time to take the decorations down and turn off the Christmas lights. When the lights were turned on in December, in cities around the world, it was the cue to start shopping for all that stuff which we wrapped, gave to friends and family, which is now languishing looking for a home, on a shelf perhaps, in a cupboard, taken to a charity shop or, for those particularly useless presents, chucked in the bin. Now that it is time to switch off the Christmas lights, let us reflect. 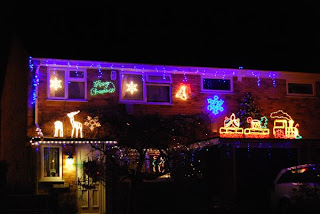 As we start 2013, there are difficult challenges to solve. Climate change caused by excess emissions of carbon dioxide is high up on the list of priorities that need a resolution. The world has done nothing substantive in response. The current situation is a long drawn out discussion leading nowhere useful.  Today, marks a small step forward as the Christmas lights are turned off.

Christmas lights are a waste of energy and an unnecessary source of carbon dioxide emissions but when put up in the centre of a community perhaps also bring light and a little joy into people’s lives. The same cannot be said of private homes festooned with flashing lights looking like some sort of Christmas brothel for Santa’s elves. They often appears in pairs of houses where a competition seems to take place between neighbours to see who can make the most ‘impressive’ display ‒ and run up the biggest electricity bill. This is conspicuous consumption gone mad; exposing your passion for Christmas bling outside the privacy of your home is more likely to attract ridicule than admiration.

Let us accept a New Year resolution to make progress over the coming year; if nothing else to ban the annual display of Christmas lights until we have decarbonised the electricity supply.
Posted by Peter McManners at 14:58 No comments: