Drax is Western Europe’s biggest coal-fired power station. It receives government subsidy through the allocation of Renewable Obligation Credits (ROC). This seems ridiculous – and is ridiculous – but there is a logic which those who focus on counting CO2 emissions find persuasive; it goes like this. 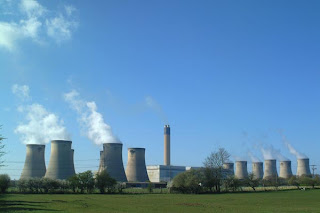 In 2011, Drax emitted 21.5 million tons of CO2. However 6% of this came from co-firing 3,500 tonnes per day of biomass (wood chips, straw and other material). It is claimed that this is enough to power 350,000 homes. Net CO2 emissions are reduced compared with what they would have been because the biomass component is renewable. There are plans to increase the co-firing of biomass to 50% saving yet more net CO2 emissions. Adding up carbon emissions, this seems like a good idea, until you do a careful the strategic appraisal.
Drax Power Station: Photo courtesy of freefoto.com

Drax management is struggling to set the strategic direction for the future because carbon now has a price, and where it was given a free allocation of carbon permits, that is now coming to an end. The price of carbon is around £8 per tonne of CO2 which would amount to an annual bill for £170m. Power generation is a competitive business; this is a significant extra cost but carbon is currently very cheap and likely to get much more expensive. No wonder the owners of Drax are trying to squeeze the system for subsidies to reduce their costs. There are plans to raise the proportion of biomass to 50%, requiring a shuttle of ships to import the huge quantities of biomass required. If the government agrees to pay ROCs, it could make Drax one of the most profitable power stations in the UK and allow it to continue operating at a profit for many years.

Drax is a monument to the old system of fossil fuel and big power stations. The economies of scale are financial; it is not efficient in an engineering sense. Smaller power stations, much closer to communities, are the future. These combined heat and power (CHP) stations squeeze maximum calorific value from the fuel and, if using locally-grown biomass, reduce the transportation overhead. Further significant improvements to the insulation of the housing stock and the 3,500 tonnes per day of biomass currently burnt by Drax could power perhaps 1 million homes.

Government subsidy should flow to support investment in small CHP and better insulation of homes. The government should make it clear that the future of Drax will be left to market forces and not propped up by government subsidy. Drax investors will understand that it is obsolescent and make the appropriate choices for its future.

‘Environmental policies must be carefully structured and predictable if they are to enhance rather than undermine competitiveness.’

So begins an article in the current edition of Harvard Business Review, ‘Green Rules to Drive Innovation’ by Daniel Esty and Steve Charnovitz. To paraphrase the article, they write about energy and climate policy from a viewpoint that this has to be done so let’s do it right. Looking across the pond from Europe, companies in Europe should be concerned. Europe is well advanced in putting a cost against carbon dioxide emissions, considerable investment is flowing into the low-carbon economy and there is growing confidence that making the early moves in green technology will pay off handsomely. But what if America, the slumbering giant so far resisting calls for action on climate change, wakes up to the opportunities? The ability of America to reinvent itself and steal a march on Europe is a very real threat to European companies.

In the article it is argued that without a coherent framework for pricing greenhouse gas emissions, American companies have been unable to make rational decisions about investments. Spending on factories, equipment, and product design where there are significant energy implications becomes fraught with difficulty. ‘This uncertainty has cast a pall over the entire U.S. economy... dampened innovation and put U.S. companies at a serious disadvantage.’ The authors argue that U.S. business is put at a disadvantage compared with businesses in countries where clear policies have sharpened the corporate focus on waste and inefficiency and spurred innovation.

If America enters the international competition for green and renewable technologies, it would be a game changer. The nation that put a man on the moon could turbo-charge green innovation. For example in aviation, U.S. companies have the technology to launch the next Golden Age of aviation, but there is little sign that the U.S. government will allow it. The necessary action includes putting a price on carbon and tax on aviation fuel, but such proposals are greeted with deep suspicion in America. With a presidential election looming, politicians will not be campaigning for increasing the cost of carbon dioxide emissions.

At the time of writing, the HBR article on green innovation does not appear to have grabbed the attention of U.S. business leaders, not appearing on the list of the most popular articles on HBR.com. Perhaps European business can rest easy that competition from the United States will not be mobilized anytime soon. That would be wrong; the United States has the capability to catch up, over take and forge ahead.

For the sake of the planet I would like to see a race for who can lead in green technology. However it is not a two-horse race; both the United States and Europe should be concerned that China could take the lead. For those who think green innovation is a waste of money; think again, the new economy will depend on it.
Posted by Peter McManners at 11:16 No comments:

This is the title of a paper I presented at the London School of Economics in 2007. My paper received considerable support and also opposition which I will explain but first, I will mention the Times campaign to improve safety for cyclists in London. Cities fit for cycling came about after Times journalist Mary Bowers was badly injured on her way to work. To succeed this campaign has to be more than pro-cycling it has to also be anti-car. My words will immediately incense car drivers seeking to defend their ‘rights’. Such reaction is understandable from city residents who know only the city of today but it is very short sighted. Policy that deliberately and specifically gives the city back to its people (on foot, by bicycle and on public transport) leads to better cities for everyone across society.

When I spoke at the LSE five years ago it was part of a conference about the future of cities in the developing world. I expected push back from delegates from the developing world objecting to my call to deny them the ‘benefits’ of car infrastructure and ownership. In fact these delegates were mostly in support; opposition was lead by World Bank officials asserting that investment in roads had the best return on investment. The real problem seemed to be that people living in advanced Western economies find it hard to envisage life with much fewer cars. 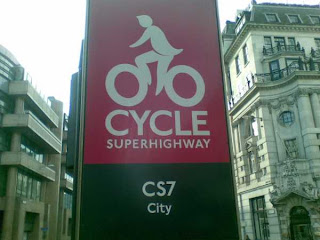 In London, at least it is acknowledged that there is a need for much better provision for cyclists but this is only a beginning; there is still huge opposition to reducing the reliance on cars, even though this is the sensible policy if only we think deeply and plan carefully.

On a personal note, I know first-hand the problem that has set off the Times campaign. Some years ago I was hit by a car, was badly injured and went through two years of rehabilitation. The driver was prosecuted, found guilty and fined but I do not blame him. The policy makers who design the infrastructure are to blame. The priority is simple and obvious; people should have more priority than cars.
Posted by Peter McManners at 02:49 1 comment:

The UK government has a difficult and important task to craft policy for aviation. It is difficult because of widely divergent viewpoints and multiple stakeholders. It is important because aviation policy has long-term consequences with decisions taken now influencing the type of aircraft and the associated ground infrastructure that will be operating in the middle of this century. The key stakeholders, in approximate order of the political power they wield, are:

Business – concerned that in a globalised world it is important to have an efficient transport infrastructure.
Passengers – a large proportion of the electorate enjoy, and would like to retain, cheap flights.
Airlines – working to tight margins with fuel a high proportion of operating costs.
Airport Operators – concerned that they will run out of capacity, particularly in the South East around London.
Environmentalists – providing the inconvenient grit in the negotiations, concerned at the growth of emissions from aviation as a cause of climate change 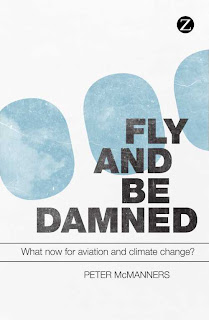 Politicians tend to make decisions with input from focus groups, which in this case would be drawn from the stakeholder groups listed above. However if politicians were to take a principled approach, they would be assessing the priorities asking the question what is the key issue that has long-term consequences. Despite the protestations of other stakeholders, that issue is the rapid growth in emissions. On a principled long-term basis, the environmentalists have logic on their side. In reality that counts for little; the electoral cycle sets the timeframe and the first four categories of stakeholder have louder voices. What is very strange about this particular policy stalemate is that putting long-term environmental concerns as the foundation of aviation policy will lead to a golden age of aviation. The price is severe disruption in the short-term but the outcome is better for all stakeholders.


Fly and Be Damned: What now for aviation and climate change?

Politicians should read my book, and take a principled approach launching the next golden age of aviation.
Posted by Peter McManners at 01:42 No comments: