Electric cars are not Green

I drive an electric car because it helps in learning about the future of transportation. My previous car was a diesel car over 10 years old with 120,000 miles on the clock and capable of doing at least the same mileage again before needing to be junked. Continuing to drive that car would have been greener in the short term. The carbon dioxide emissions associated with driving my electric car – when the carbon intensity of the electric grid is taken into account – is similar to an efficient diesel car.

On a sunny day I can charge my electric car from the solar panels on my roof but that claim is not green either. Over the year we generate a large proportion of our domestic electricity but I shouldn’t double count it. There is hope that we can decarbonise the electric grid and then electric cars can be green but we are a long way from doing that. Whatever way you look at it, electric cars are not green.


The other lesson to feed back to the electric car manufacturers is that drivers do not need more range. That is an idea that comes from people who drive conventional cars. An electric car is for relatively short local journeys. As battery technology delivers more efficient batteries the saving should be used to the best advantage. That is reducing the cost, weight and embodied carbon in the manufacture of the car. We electric car drivers want greener electric cars, not longer range.

Climate sceptics have provided a convenient excuse for over two decades to ignore the risks of climate change. The Berkeley Earth Surface Temperature team (BEST) was established to settle the debate led by the world’s leading climate sceptic scientist, Richard Muller and part-funded  with $150,000 from the Charles G Koch Charitable Foundation, set up by the billionaire US coal magnate.  They recently published the results of their comprehensive reassessment of the climate records. They conclude:

‘...the average temperature of the Earth’s land has risen by 1.5 °C over the past 250 years. The good match between the new temperature record and historical carbon dioxide records suggests that the most straightforward explanation for this warming is human greenhouse gas emissions.’ 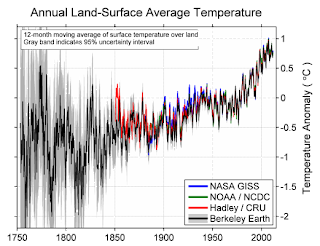 So we have the final acceptance that the Earth is warming and that human greenhouse gas emissions are the cause. The sceptical scientists who led this study should be applauded for sticking to the rigour of the science and accepting that their earlier views were mistaken. The bandwagon of climate change deniers should now disperse and people like Nigel Lawson, a clever man who for whatever reason decided to fight against action to address climate change, should retire gracefully and hope people forget his rather silly campaign. The problem is that this is a not an Oxford Union debate in which people win or lose an argument on the merits of their oratory skills; this is about facts and the future of humanity. Climate scientists have not always been the strongest debaters. Many sceptics have outstanding skills at holding the attention of an audience. They have succeeded in putting doubt into people’s mind and injecting delay into the world efforts to take action.

Let us reflect on how long the delay has been. In 1990, I was working with climate scientists, and global warming was understood and it was known that fossil carbon emissions through human activity were the cause, but policy makers needed to be persuaded.

In 1990, the IPCC’s first report concluded:
•’Anthropogenic climate change will persist for many centuries.’
•’Further action is required to address remaining gaps in information and understanding.’

In 1995, the IPCC’s second report concluded:
‘The balance of evidence suggests a discernible human influence on global climate.’

In 2001, the IPCC’s third report concluded:
‘In light of new evidence and taking into account the remaining uncertainties, most of the observed warming over the last 50 years is likely to have been due to the increase in greenhouse gas concentrations. Furthermore, it is very likely that the 20th Century warming has contributed significantly to the observed sea level rise... and widespread loss of land ice.’

The 2001 report, after over a decade of work, nailed just about all we need to know about climate change but still the sceptics persisted to oppose the science.

How can it have taken 22 years to get this accepted? Will we now, finally, leap into action?